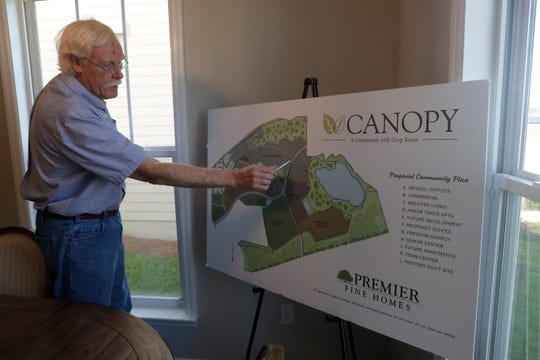 Tom Asbury, one of four developers for the the Canopy at Welaunee community, explains the different sections of the development on a map displayed inside one of the single-family model homes Thursday, May 23, 2019.  (Photo: Tori Schneider/Tallahassee Democrat)

Following a lengthy workshop, both the city and county moved forward with setting a final adoption hearing for amendments to the community’s growth blueprint related to the large Welaunee property next month.

The city is the applicant for the project but also reviews and gives final approval to the proposal. There are no immediate plans for development on the property.

Tuesday night’s 5-hour workshop came on the heels of nine major changes that were proposed to the comprehensive plan amendments for the 4,800 acres of land wedged between Miccosukee and Centerville roads and Interstate 10. The changes surfaced in the last few months based on citizen input. 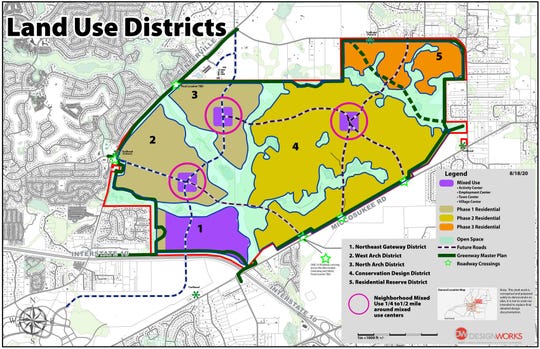 The proposed districts to the 2,800-acre Welaunee Arch would include the Northeast Gateway District, West Arch District, North Arch District, Conservation Design District and the Residential Reserve District, each with its own development pattern of mixed use, neighborhood and residential. (Photo: City of Tallahassee)

The property is being viewed as an opportunity to plan for Tallahassee’s growth in the coming decades but has faced opposition because some say it’s development could mar the rural character of the landscape and contribute to more urban sprawl.

The most prominent change divides 2,800 acres of the property, known as the Arch, into five districts, each with its own land use densities and categories.

Districts would include the Northeast Gateway District, West Arch District, North Arch District, Conservation Design District and the Residential Reserve District, each with its own development pattern of mixed use, neighborhood and residential. 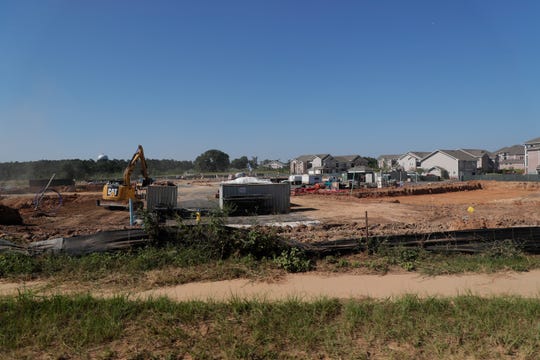 Advocates with the Keep it Rural group pushed to have a larger green space park area added to a district north of Interstate 10 off Miccosukee Road along with the proposed contiguous wild corridors throughout.

Both approvals by the commissions include language proposed by County Commissioner Rick Minor that would allow developers to transfer acreage into the conservation district in an effort to increase the size of the open space.

The amendments apply to a large portion of the boot-shaped property, which includes an undeveloped “Arch” north of I-10 off Centerville Road.

One would change the future land use map designation for 2,810 acres in the Arch from rural to planned development.

The other expands the Urban Services Area (USA) — where city utilities such as electricity, water and sewer are available — and would update the Welaunee Critical Area Plan to include the future development plan for the Arch.

This is a developing story. Check back with Tallahassee.com for updates

Never miss a story: Subscribe to the Tallahassee Democrat.