With An Election On The Horizon, Older Adults Get Help Spotting Fake News : NPR 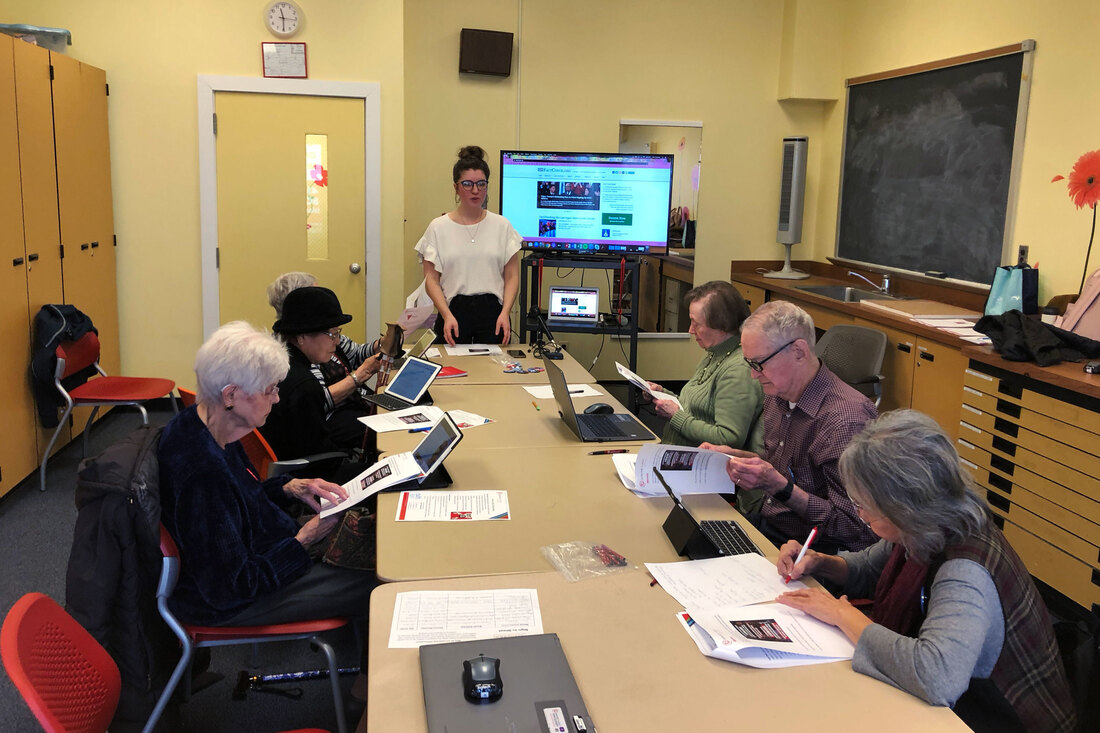 Bre Clark leads a workshop at the Schweinhaut Senior Center in Silver Spring, Md., called “How to Spot Fake News.” 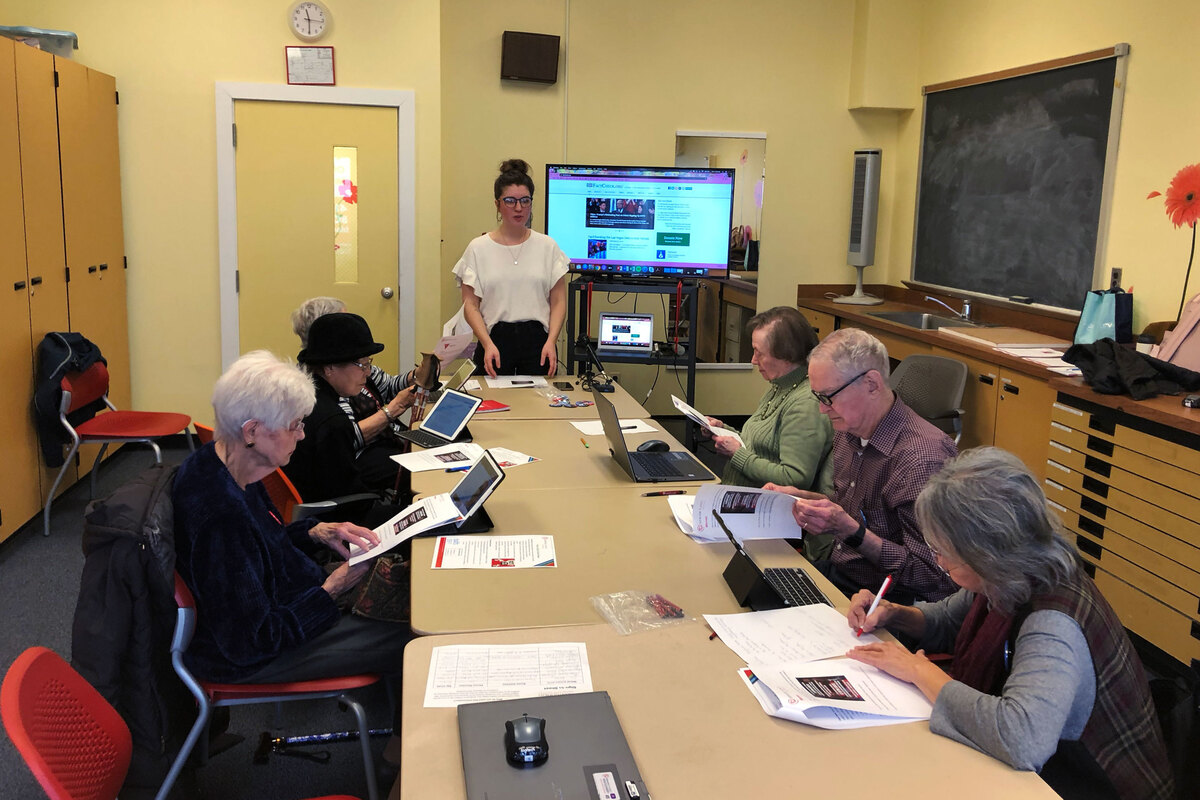 Bre Clark leads a workshop at the Schweinhaut Senior Center in Silver Spring, Md., called “How to Spot Fake News.”

At the Schweinhaut Senior Center in suburban Maryland, about a dozen seniors gather around iPads and laptops, investigating a suspicious meme of House Speaker Nancy Pelosi.

Plastered over her image, in big, white block letters, a caption reads:

“California will receive 13 extra seats in Congress by including 10 million illegal aliens in the 2020 U.S. Census.”

The seniors are participating in a workshop sponsored by Senior Planet called “How to Spot Fake News.” As instructed, they pull up a reputable fact-checking site like Snopes or FactCheck.org and, within a few minutes, identify the meme is peddling fake news.

“It’s right there!” 86-year-old Marlene Cianci tells the class. “Just a two-step thing and there it was!”

Researchers say classes like this one should be more widely offered, especially with the 2020 election approaching.

After Russia launched a massive disinformation campaign on social media during the 2016 election, many middle and high schools rushed to add digital literacy courses to their curriculums. Now, U.S. officials say Russia is again interfering in U.S. elections. But experts say older adults may struggle the most with identifying fake news, and classes designed to teach these skills to seniors aren’t yet common nationwide.

A recent study suggests these classes could be increasingly important. Researchers at Princeton and New York universities found that Facebook users 65 and over posted seven times as many articles from fake news websites, compared with adults under 29.

“And that raises a lot of questions about what could be driving this relationship,” says Andrew Guess, an assistant professor of politics and public affairs at Princeton and a co-author of the study. 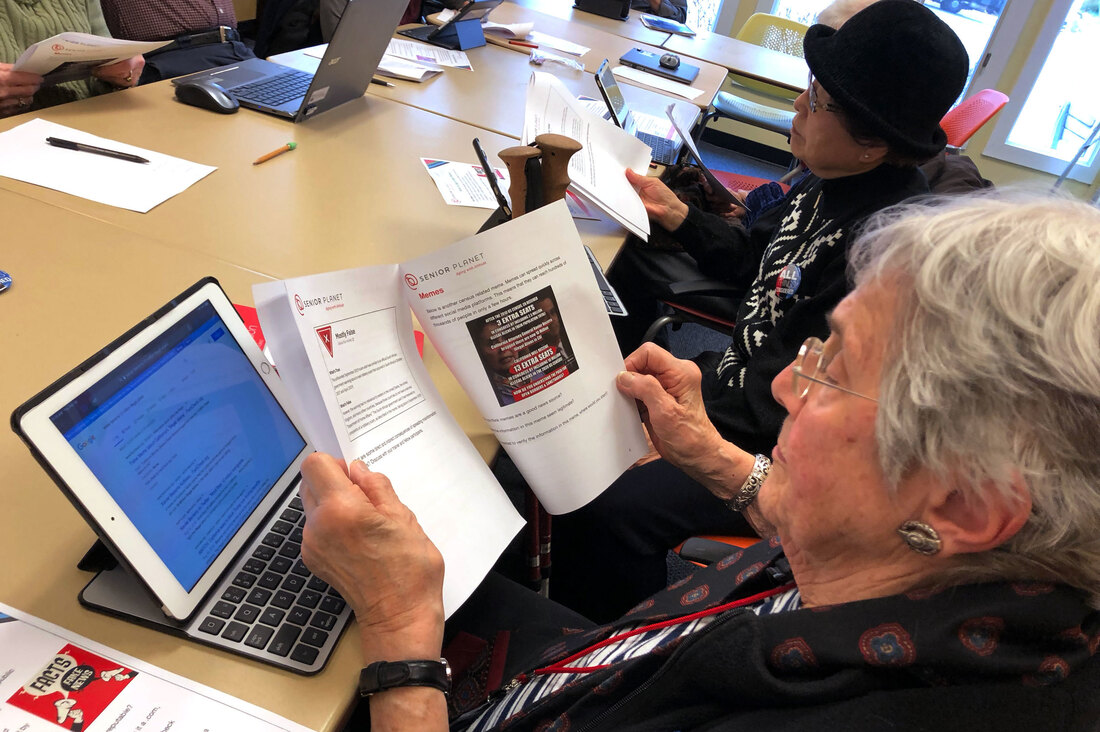 Marlene Cianci looks at a meme about the census. The workshop helps seniors parse the source of an article, fact-check a claim online and discern propaganda from reputable sources. 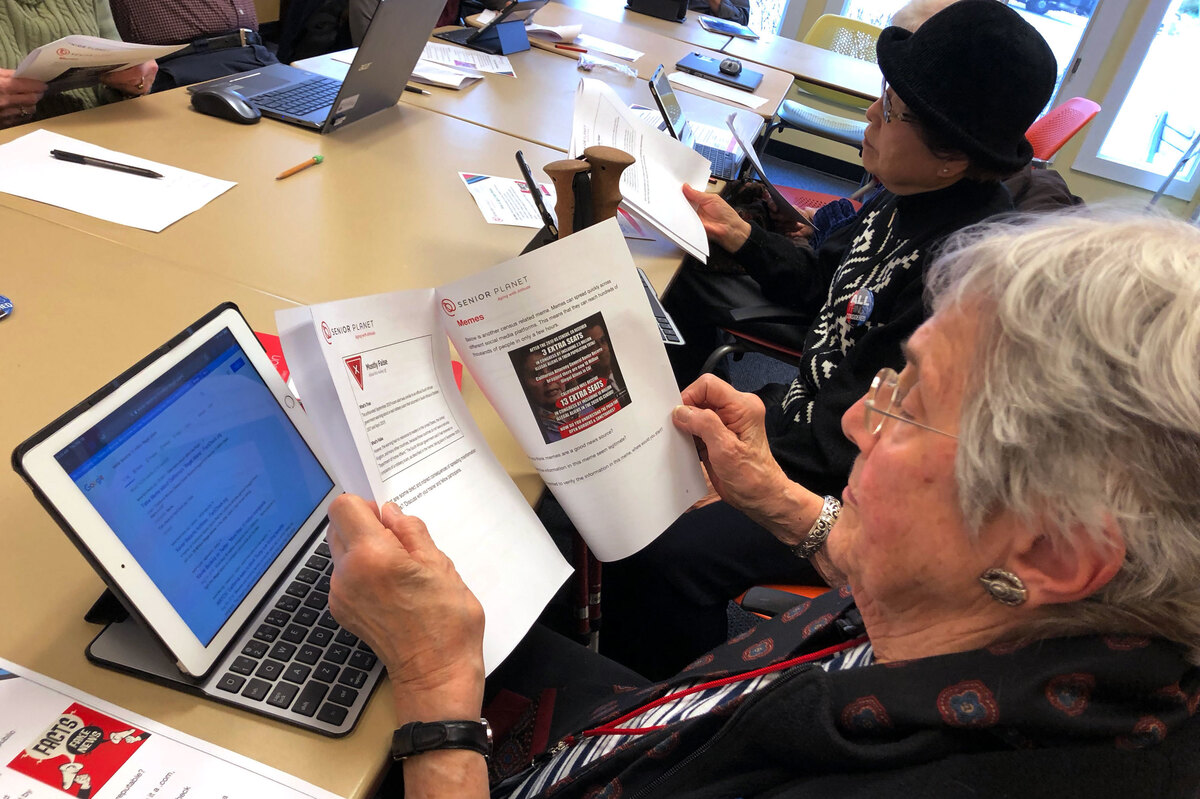 Marlene Cianci looks at a meme about the census. The workshop helps seniors parse the source of an article, fact-check a claim online and discern propaganda from reputable sources.

Guess says there hasn’t been a lot of research into this question yet, but it’s likely digital literacy could have a lot to do with it. And he says that provides reason for optimism.

“People who are not digital natives didn’t grow up online, having a sort of a natural relationship to using computers and the Internet,” he says. “They are simply more susceptible to the kinds of online content that happened to be weaponized in that particular election. If it turns out this is the big part of the explanation, digital literacy is something that can be taught and it’s a skill that can be developed.”

At Stanford University, Susan Nash is one of the researchers who’ve been looking at why seniors may be more likely to struggle with fake news.

“If we were standing in line in the supermarket, and we saw a tabloid,” she says, “people in my generation know what that means, but if we see something online, the traditional cues we’re used to are not present.”

Nash says confirmation bias, the tendency to interpret new information in a way that confirms prior beliefs, can also get stronger with age.

Isolation can be a factor, too, meaning seniors are more likely to be alone, perusing the Internet and hitting the share button. According to the U.S. Census Bureau, people 65 and older will soon be the largest age group in the United States. That age group also tends to have the highest voter turnout.

And since a recent study from the AARP finds tech use is climbing among older adults, Nash says it’s important to tailor workshops to their specific needs.

“Just because you’re online, doesn’t mean you’re ready to evaluate everything you see there,” she says.

For example, Nash says the best way to check out a source is to open a new Internet tab and do a deeper search. But if you’re new to navigating the Web, just opening a separate tab can be a hurdle.

“The No. 1 recommendation was the No. 1 thing many older people were unable to do,” she says.

Nash says classes for seniors taught by peers are especially effective, as well as checklists and hands-on practice.

And with an election on the horizon, Nash says the stakes are high.

“We all know an informed democracy is the only way democracy works,” she says. “And if we don’t teach them how to evaluate what they’re seeing, then we are poisoning our electorate.” 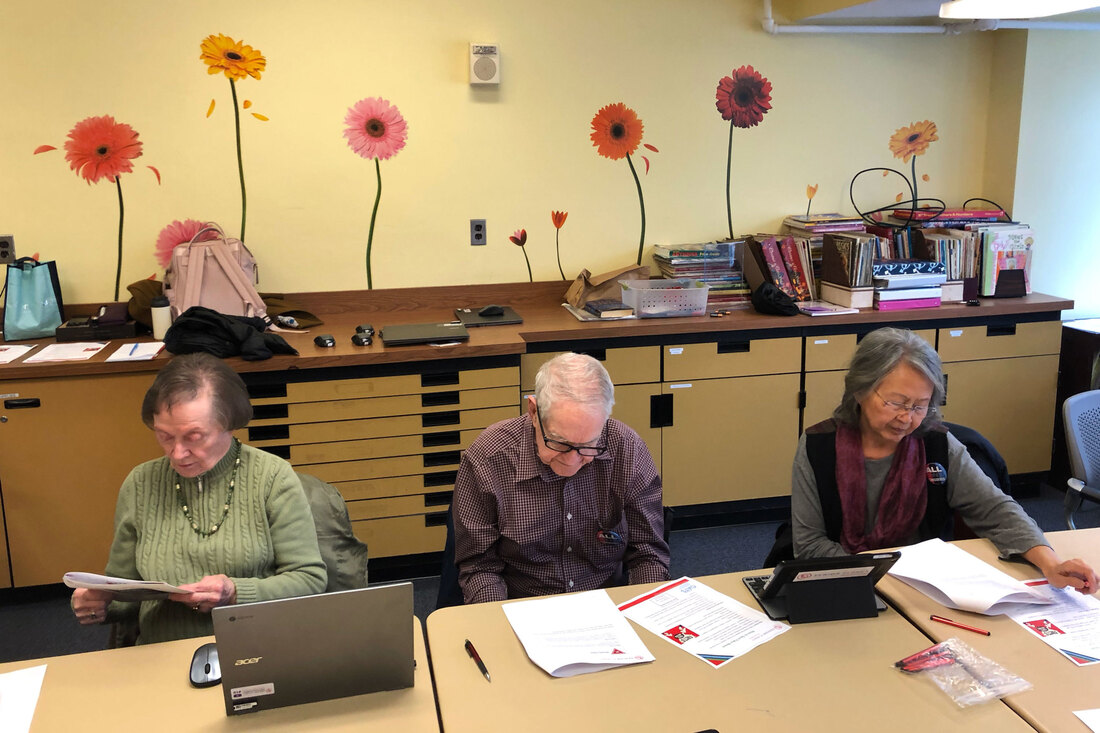 Seniors at the Schweinhaut Senior Center participate in a workshop on spotting fake news. The workshop is organized by the nonprofit Senior Planet. 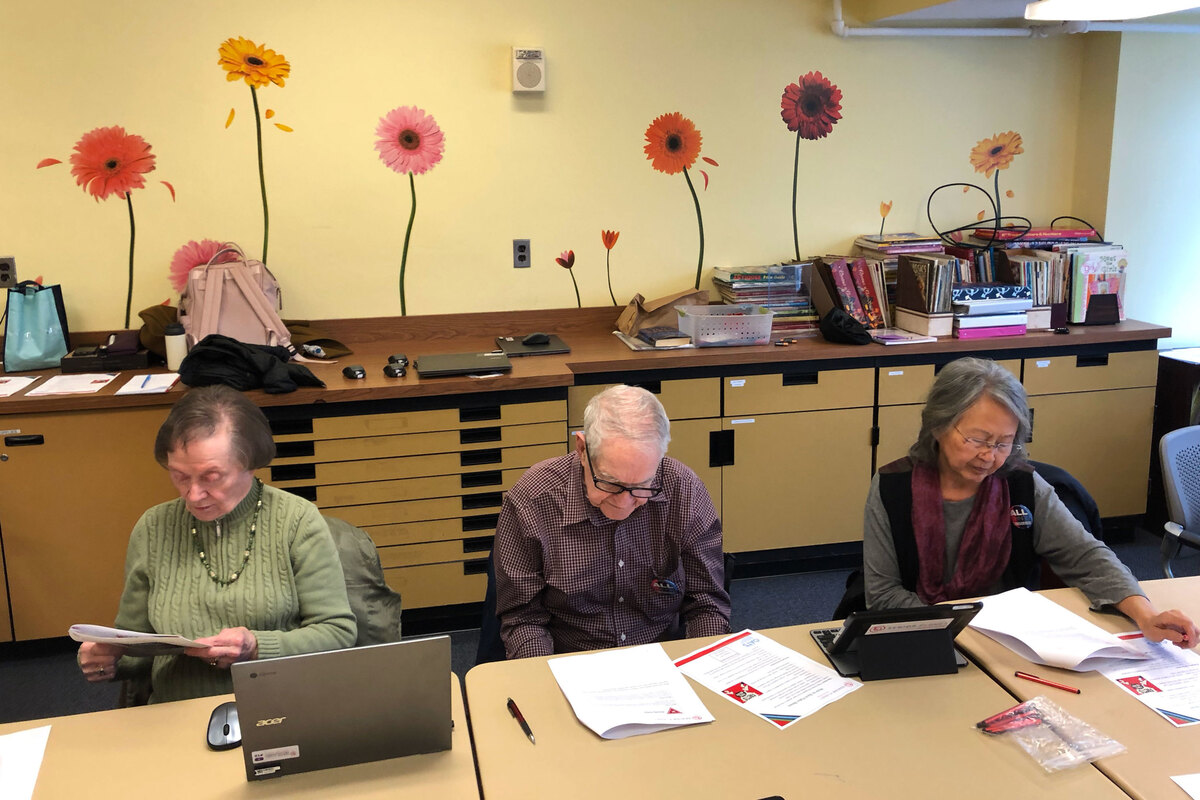 Seniors at the Schweinhaut Senior Center participate in a workshop on spotting fake news. The workshop is organized by the nonprofit Senior Planet.

At the Schweinhaut Senior Center, trainer Bre Clark coaches participants about the difference between propaganda, deep fakes and sponsored content. And she runs through a checklist for evaluating information online: Who wrote the information? What’s the source of a claim? Does the author have an agenda?

“This topic is political,” Clark says. “And we form our opinions throughout our lifetime, and we get mired in our opinions as we grow older. And it’s not about being someone that can’t change their mind, it’s not those stereotypes of older adults.”

Clark says her program, Senior Planet, which sponsors all kinds of tech classes for older adults at several locations across the country, has been trying to get digital literacy in front of more seniors. But in many ways, it’s more challenging than it might be for school districts.

“School settings are easy to integrate new things, when we notice that there’s this gap that we’re not addressing,” she says. “Our senior centers here in Montgomery County stand out. And there’s not places like this all over the country.”

Ninety-two year-old Patricia Cramer says she appreciated the workshop, even though she thinks older adults know how to spot something fishy and shouldn’t shoulder all the blame for this problem.

“If you tell me that you’ve got an ice cream cone, I’m gonna say, ‘Where is it?’ I want to see the proof,” she says. “I’m going to question everything. Because we’ve been fooled a lot of times when we’re younger.”

After the class, Joice Wu, 79, says she feels empowered to wade through it at all.

“In this new technology, where things go so fast, we get left out sometimes, or we get confused,” Wu says. “So having this sort of program really enlightens us and helps us to advance and learn more and become more braver.”